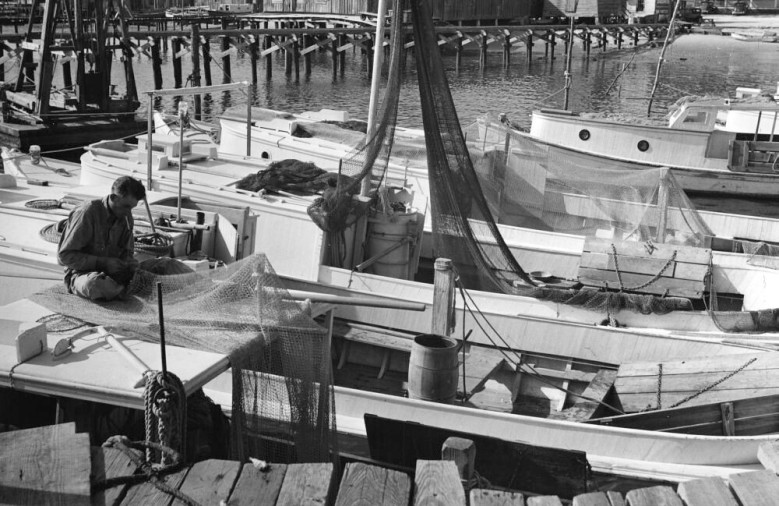 Today– part 4 of my series “`The Shrimp Capital of the World’– Charles Farrell’s Photographs of Southport, N.C., 1938″

The rise of Southport’s shrimp industry seemed to happen in the blink of an eye. Prior to 1900, there had been only a very small commercial fishery for shrimp in Southport or anywhere else on the North Carolina coast.

As recently as 1902, the total value of North Carolina’s shrimp landings was only $2,700 and hardly any coastal people ate shrimp.

In those days, the state’s fishermen were more likely to fertilize their gardens with shrimp than to sell them, much less put them on their own dinner tables. Some coastal people still derisively called them “bugs.”

Many of the state’s commercial fishermen even considered shrimp a nuisance. H. M. Brown, in Gloucester, N.C., once told me that his grandfather sometimes grudgingly took up his pound nets in Core Sound so the shrimp would not foul them.

The state’s shrimp industry first began to develop in Southport in the early 1910s.

A freighter passes behind a pair of Southport’s shrimp houses on the Cape Fear River. Courtesy, State Archives of North Carolina

The first step was the railroad.

In 1911 the Wilmington, Brunswick & Southern Railroad (a.k.a., the “Willing But Slow”) connected Southport to Navassa, just west of Wilmington, 25 miles to the north. At that time, Wilmington was the state’s second largest city and had rail links to the Mid-Atlantic States.

The Wilmington, Brunswick & Southern RR ran between Southport and Navassa (west of Wilmington) between 1911 and 1941. Photo by Charles A. Farrell. Courtesy, State Archives of North Carolina.

Along with the new availability of mechanical refrigeration and ice making, those rail lines meant that Southport seafood dealers had the possibility of shipping fresh seafood to distant markets for the first time.

The next year, in 1912, a first seafood dealer, St. George & Son, opened on the Southport waterfront. The company shipped shrimp to Philadelphia, New York and other northern markets.

As early as 1914, the company included shrimp in refrigerated rail shipments to New York City. For at least 10 days that fall, the village’s fishermen turned their full attentions to the little “bugs” apparently for the first time.

A shrimp cannery, the state’s first, opened in Southport the next year. A second followed in 1916 and a third in 1922. Local shrimp landings doubled in just a few years.

The local shrimp industry stagnated in the late 1920s and early ‘30s during the worst years of the Great Depression.

The shrimp business had picked up again by the late 1930s. By the time that Charles Farrell visited Southport in 1938, approximately 200 shrimp boats worked out of the village at the peak of the fall season. On average, local dealers handled 27,000 pounds of shrimp a day at that time of year.

By the eve of the Second World War, the shrimp industry had also spread to other parts of the North Carolina coast, including Carteret County and Pamlico Sound.

Within a few years, shrimping became the state’s most profitable fishery. By 1948 the Raleigh News & Observer reported, “it’s getting hard some days to buy yourself a trout or mackerel or bluefish….all the men have gone shrimping.”

Fourteen years after these photographs were taken, in 1951, the state’s shrimp industry seasonally employed 2,500 fishermen and 4,000 peelers, packers and canners.

A Side Note– A debt to Fernandina Beach

In the early 1900s, Southport’s rise into an important center for the shrimp industry owed a special debt to another shrimping town 300 miles to the south— Fernandina Beach, Florida.

After the Civil War, a Sicilian man named Sollecito “Mike” Salvadore emigrated to Fernandina Beach. He had been a seaman on an Italian freighter that took shelter in the local harbor during a hurricane and ended up staying.

Salvadore started fishing and shrimping. At that time, most locals were still shrimping with rowboats and cast nets.

Along with other Italian immigrants (and maybe some Greek boat builders too), Salvadore and his brother-in-law Salvatore Vessagi made Fernandina Beach into the East Coast’s first great shrimping port.

To an important extent, they created the modern shrimp industry.

They did so by introducing a series of technological and business innovations:

A decade later, in 1913, they introduced a net rig called an “otter trawl” that is still used today and which I’ll discuss more in my next post in this series.

They also pursued shrimp into offshore waters, which was a first at least on the East Coast of the U.S.

In addition, they pioneered a business model that relied on mechanically produced ice (a new thing at the time), refrigerated train cars and shipping fresh shrimp to northern markets– especially to the Fulton Fish Market in New York City.

Following Fernandina Beach’s lead, more than 90 percent of Southport’s shrimp ended up in New York City in those early years of the local shrimping industry.

In those early years, shrimp companies often invested in both towns, and shrimpers often went back and forth between them.

Together they forged a bond between Southport and Fernandina Beach that would last at least half a century.