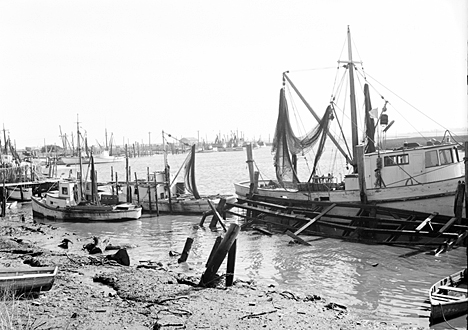 Today– the conclusion to my special series ‘`The Shrimp Capital of the World’– Charles Farrell’s Photographs of Southport, N.C., 1938″

Charles Farrell’s photographs chronicled Southport’s shrimp industry in its heyday, but those days did not last forever. In fact, they came to an end suddenly, on the 15th of October 1954.

On that autumn day, hurricane Hazel hit Southport and washed away everything that we can see in Charles Farrell’s photographs—the shrimp houses, the docks, the trawlers, the boatyards, all of it.

With 150 mile an hour winds, Hazel was the only Category 4 hurricane to hit the North Carolina coast in the 20th century.  The storm killed 600 people from Haiti to Canada, including 19 here in North Carolina.

Nearly every building on the Brunswick County beaches was destroyed—352 of the 357 buildings at Long Beach.

Years ago I interviewed a woman named Leila Pigott about Hazel and Southport’s shrimp industry. Her husband Dallas was in the shrimp business, and they lived just across the street from the shrimp houses and the Yacht Basin where many of the trawlers were tied up.

She and her family barely escaped with their lives.

Mrs. Pigott recalled what she saw when the winds finally settled down and the floodwaters receded.

“Finally, by 3 o’clock it was perfectly calm. The neighbors next door came over here. We got together and we started walking and stopping at each house. We cried every time we saw each other.

“On the waterfront there was not a single building left. Seventeen shrimp houses were lost. There was nothing left but piling. There were boats lost and houses were smashed, but we were still alive.”

Many, many thanks to all the people who so graciously took the time to share their knowledge of Southport’s shrimp industry with me. 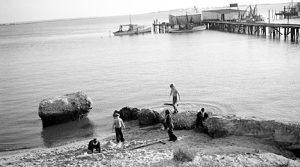 I’d also like to thank Donnie Joyner, who organizes Southport’s wonderful Black History Celebration every year, and Lori Sanderlin, the valiant leader of the N.C. Maritime Museum at Southport, for all their help with my research. I could not have done this series without their support.

I’m also very grateful to Kim Andersen and Vann Evans at the State Archives of North Carolina for guiding me so capably through Farrell’s photographs.

In part 2 of this series, the quote from K. B. Keziah of the Southport Pilot comes from a file in the Farrell Family Papers at the Greensboro Historical Museum in Greensboro, N.C.

4 thoughts on “Hurricane Hazel: “Nothing left but piling””