One of George Washington Creef’s shad boats, the Tom Dixon (built ca. 1891), in the backyard of Earl Willis, Jr.’s mother’s house in 1980. After H. R. Creef restored her, Earl donated the Tom Dixon to the N.C. Maritime Museum. Photo by Mike Alford

This is the 12th and final part of my special series “The Story of Shad Boats.” The series features Earl Willis, Jr. and Mike Alford’s extraordinary journey to document the history of North Carolina’s “state boat.”

According to Mike and Earl’s research, a Roanoke Islander named Ben Daniels was the first builder to convert a shad boat from sails to a gasoline engine. Daniels, who was Earl’s great-great grandfather, lived on Old Schoolhouse Road in Wanchese. He put a 3 and ½ HP Lathrop in a shad boat sometime between 1905 and 1908. 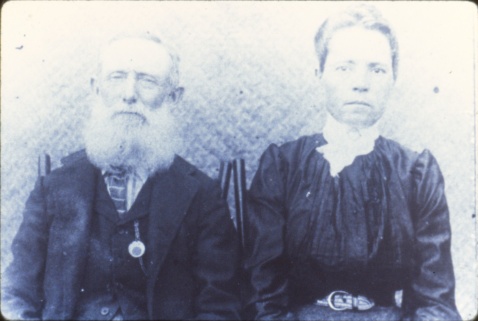 Ben Daniels and his wife Sarah. In addition to being Earl’s great-great grandparents, they were also the great-grandparents of former president pro tempore of the NC Senate, Marc Basnight. Photo courtesy, Earl Willis, Jr.

When talking with Earl, Joe Meekins explained that fishermen wanted the extra power and speed, as well as a gasoline engine’s independence of the wind’s force and direction, at least in light winds.

Other local boat builders followed suit over the next decade.

Evidently they had little difficulty converting a shad boat from sail to gasoline power:  a builder pulled off the old boat’s centerboard and well, added a couple of battens on the bottom piece in order to add depth, bore the shaft ally and made a few other minor alterations. 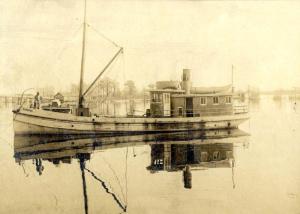 The Pompano was one of the Globe Fish Co.’s freight and passenger boats. Courtesy, Museum of the Albemarle

By the mid-1910s, Lathrop, Miannis and other gasoline engines powered nearly all the local shad boats.

Maritime people had relied on wind and sail for millennia. It was almost stunning how quickly the Age of Sail ended and the putt-putt-putt of those “make and break” engines replaced the rustle of wind in the sails.

Of course there were always coastal Carolinians reluctant to give up the old ways. As boats and the rest of the world changed around them, they clung to the satisfactions of sailing in a good stiff breeze, though they did so mainly for pleasure, rarely to make their livings.

The Redfin and the Old Shad

Shad boats at first made the transition from sail to gasoline power with little difficulty. On the waters around Roanoke Island, they remained popular fishing craft well past the First World War.  Some fishermen were still using shad boats after the next world war.

A stalwart few fishermen still worked out of old shad boats into the 1980s, and at least one or two were still using them into the 21st century. One might still be out on the water somewhere.

In the photograph below, we see the shad boats Redfin and Old Shad at the Beasley & Sons Fish Co. in Colington in 1980.

Hatteras Island photographer Mike Halminski found members of the Beasley family still fishing with a pair of shad boats, the Redfin and the Old Shad, in 1980. The Beasleys were from Colington, but fished mainly out of Rodanthe at that time. Courtesy, Michael Halminski.

Local boatyards had turned away from building shad boats many years earlier, though. In the late 1910s and early 1920s, larger, more powerful 4-cycle automobile engines became available for the first time.

Fishermen sought out the larger engines for a number of reasons, but one important reason was a steep decline in shad catches in the 1920s. That decline pushed fishermen to travel further afield in order to find productive fishing grounds and less competition.

By the late 1930s, it was not unusual for a shad fisherman to tend pound nets 20 miles or more away from home.

Commercial fishermen increasingly sought out those 4-cycle automobile engines. However, according to some (but not all) of the old timers with whom Mike and Earl visited, the shad boat’s design did not adapt well to those heavier engines, which purportedly made them lay too low in the water. 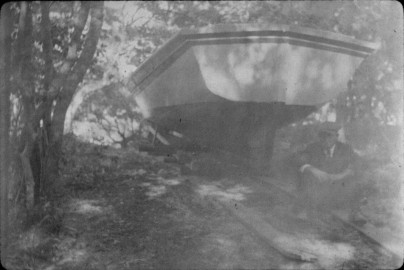 A round chine dead-rise and its builder, probably one of the Dough brothers, Roanoke Island. Courtesy, State Archives of North Carolina

By the late 1920s, the number of shad boat builders had dwindled. Increasingly, local boat shops turned out other kinds of workboats. Judging from Earl and Mike’s research, a boat that locals referred to as a “round chine deadrise” grew especially popular.

The chine (usually pronounced “chime” on and around Roanoke Island) is the angle formed where a boat’s side planking meets its bottom planking. As such, it is only found on some deadrise (V-bottom) boats.

The design and evolution of the round chine dead-rise is a topic for another day, but for now it’s enough to say that its design owed much to the design of shad boats. Yet they were easier to build, did not require root knees and their performance was apparently similar on the water.

According to Earl and Mike, the boat yards in Manns Harbor and Stumpy Point became especially well known for building round chine dead-rises.

When Earl and Mike interviewed him more than 30 years ago, veteran shad boat builder Worden Dough indicated his belief that his family had built the last working shad boats in the early 1930s.

The Outer Banks’ first real estate development company, the Carolina Development Co., ordered those shad boats for use as “battery boats” at its waterfowl hunting club on Currituck Sound.

Duck and goose hunting guides used battery boats to carry hunters and supplies to their shooting posts on local bays and sounds. 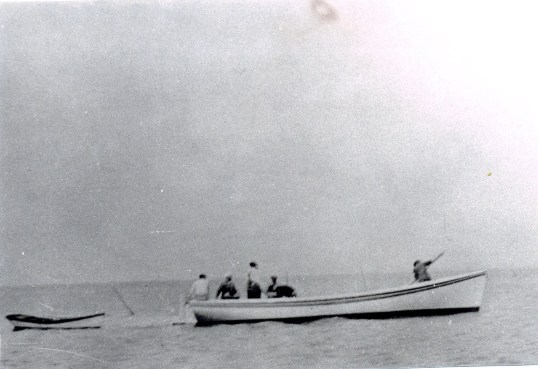 One of the big shad boats that the Doughs built for waterfowl hunting on Currituck Sound ca. 1930. Courtesy, State Archives of North Carolina

Most historical accounts agree that those Dough-built battery boats were indeed the last shad boats built.

The shad boat’s legacy lives on, however, and to a great extent that is due to the efforts of the two men whose work I have featured in this series, Earl Willis, Jr., and Mike Alford.

Mike Alford recording the construction details and midship section shape from the relic of a shad boat found in the woods on the north side of Roanoke Island in 1981. Mike believes it was a Ken Mann-built boat. Courtesy, Mike Alford

Though its heyday passed a century ago, the shad boat remains a central part of North Carolina’s maritime history.

The boat is featured with special prominence at the Roanoke Island Maritime Museum in Manteo, N.C. At the museum, you can find a restored shad boat that is absolutely breathtaking.

George Washington Creef built that boat, the Ella View, in 1883.

Several other museums on the North Carolina coast have shad boats in their collections as well.

A restored shad boat, built by Alvirah Wright of Camden County in 1904, hangs at the entranceway to the Museum of the Albemarle in Elizabeth City.

You can also find a replica of a shad boat at the Cape Fear Museum in Wilmington, N.C.

Built by H. A. Creef, Sr. and restored by Joe Meekins, the shad boat Foul Play is now on display at the Roanoke Adventure Museum in Manteo, N.C. Photo by Jeffrey B. O’Neill. From his ECU M.A. thesis “The Technological and Cultural Context of the North Carolina Shad Boat” (2016).

Thirty-two years ago, the N.C. General Assembly also recognized the importance of the shad boat in the state’s maritime history by designating it as the official “state boat” of North Carolina.

Earl led the campaign to bring the historic importance of the shad boat to the attention of our state legislators. Mike wrote the technical justification that Sen. Marc Basnight presented to the General Assembly. 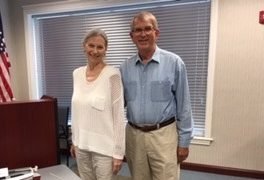 In the years since then, a long line of maritime historians, underwater archaeologists, college students and traditional workboat enthusiasts have sought out Mike and Earl in order to learn more about shad boats. The two welcome that interest and are always generous with their time and knowledge.

As I wrap up this series on Earl and Mike’s research on shad boats, I can’t help reflecting on how fleeting the shad boat’s heyday was and yet what a lasting impression it has made on our maritime history.

After all, the shad boat’s heyday was brief. All but a few shad boats were built in the half century between 1880 and 1930.

Less than two dozen boatyards turned them out. Those boatyards were located on a scant few islands and in a handful of other fishing villages, none of them home to more than a few hundred people.

And yet, as the old timers told Earl and Mike many times, “That was a smart boat.”  It was a highly functional craft, in harmony with its environment to a high degree and, in the eyes of master builders, marine architects and casual observers alike, a thing of grace and beauty.

Such things do not last forever. Fortunately, however, we will always have Earl and Mike’s passionate, careful and informed research to help us to remember, appreciate and draw inspiration from those boats and the people who built them and worked in them.

David Cecelski and the Ella View while she was at the N.C. Maritime Museum in Beaufort for routine maintenance. George Washington Creef built the Ella View in 1883. Photo by Tom Earnhardt

Thanks above all, to Mike Alford and Earl Willis, Jr..

I cannot put into words my deep appreciation to them for their willingness to share their knowledge with me or the great pleasure I have found in accompanying them on even little pieces of their journey to understand shad boats and their history more fully.

Earl and Mike also provided many of the historical photographs that I have used in this series.

I am also grateful to Mike Halminski for permission to use his photographs of shad boats on the Outer Banks.

I’d also like to thank Tom Earnhardt for permission to use his photographs of me and the Ella View that he took while he, Bland Simpson and I were taping an episode of his wonderful PBS show “Exploring North Carolina.”

For sharing their photographic collections with me, I would also like to thank the Museum of the Albemarle, the Outer Banks History Center, the North Carolina Maritime Museum, the Smithsonian Institution and the State Archives of North Carolina,

I also want to thank Jeffrey B. O’Neill for his very helpful M.A. thesis, “The Technological and Cultural Context of the North Carolina Shad Boat” (ECU, 2016).

Finally, I want to extend a special thanks to Chris Meekins at the N.C. Dept. of Natural and Cultural Resources for sending me the George Washington Creef affidavit from 1871 that I referenced in Part 4.

If you are interested, you can find that affidavit in the George B. Blevin claim, file no. 4171, RG 217, Records of the Accounting Officers of the Treasury Dept., Entry 732, “Settled Case Files for Claims Approved by the Southern Claims Commission, 1871-1880” ( Dare County, N.C. ), National Archives. It can be accessed on-line through Fold3.com’s “Southern Claims” database.

9 thoughts on “The Last Shad Boats”