This is the 11th and second-to-last part of my special series “The Story of Shad Boats.” The series features Earl Willis, Jr. and Mike Alford’s extraordinary journey to document the history of North Carolina’s “state boat.”

A good man and a good friend

One of the most important aspects of Earl Willis’s interviews is the light that they shine on shad boat builders other than George Washington Creef, the man widely considered to have been the first builder of the craft and the one who set the standard for its craftsmanship.

Rynalda “Nal” Midyette, Engelhard, ca. 1890. He married Luvenia Spencer in 1892 and this might have been a wedding photograph. N.C. Courtesy, Earl Willis, Jr.

Among those other builders, the one that stands out most in Earl and Mike’s research is Rynalda N. Midyette.

Midyette was a master boat builder in Engelhard, a village 30 miles southwest of Roanoke Island on the mainland of Hyde County.  In Earl’s interviews, the last surviving shad boat builders and fishermen spoke of him and his boats in almost reverential tones.

As I mentioned in a previous post, a number of those old timers even believed that Midyette’s shad boats exhibited a level of craftsmanship equal or superior to that of George Washington Creef.

Unlike Creef, however, no museum exhibit, historical marker or book has ever commemorated Midyette or his boatyard.

Born in Engelhard in 1868, Midyette came from a family with deep roots on that part of the North Carolina coast.

According to family lore, the first Midyette (also spelled Midgette, Midgett and Midyett) left England and arrived in North Carolina when his ship wrecked on the Outer Banks sometime in the late 1600s or early 1700s.

Over the years, that shipwreck survivor’s descendants settled on the Outer Banks and in coastal communities on the mainland such as Columbia, Gum Neck, Manns Harbor, Stumpy Point and Engelhard.

Drawn to the maritime trades, an extraordinary number of the Midyettes (and Midgettes, Midgetts, etc.) made their livings as fishermen, seamen, coastguardsmen, pilots, dredgers and boat hands.

A Life in Engelhard

While there is much we don’t know about Nal Midyette and his boatyard, the interviews that Earl and Mike did with the last generation of shad boat builders and fishermen provide at least a glimpse of the master boat builder and his world.

Our most intimate source of information about Midyette is an interview that Earl did with Midyette’s daughter, Ethel Midyette Carawan, in 1983.

According to Mrs. Carawan, her father grew up in Engelhard in lean times. She told Earl that “Capt. Nal” excelled in his studies as a child, but he could only afford to stay in school for a brief time.

After only three years, Nal left the local graded school so that he could go to work and help support his family. That was not long after the Civil War. He was probably eight or nine years old at that time.

He taught himself to read and write and to do the mathematics necessary to design and build boats.

He had a head for mathematics. Mrs. Carawan recalled that her father was capable of solving difficult math problems faster in his head than most people could do them on paper.

Her father also had a gift for music. When Earl visited Mrs. Carawan, she reminisced about his lovely singing voice and recalled how well he played the piano, auto harp and banjo.

She remembered him as a devout, kind-hearted man who at times was generous to a fault.

Others remembered Capt. Nal as having somewhat harder edges. They recalled him as a masterful shad boat builder who was exacting, strong-minded, took great pride in his work and was all business.

Max Roach used to play in Nal Midyette’s boatyard in Engelhard when he was a boy. In a conversation with Earl, he reminisced:

“Captain Nal was quite a character– no foolishness did he like. He didn’t use any caulking and guaranteed his boats not to leak. If he built a boat he considered a fast sail model, he would challenge people to race and place five dollar wagers, knowing it was a sure thing!”

— From Earl Willis, Jr., “The Birth of an American Watercraft: `Uncle Wash’ and the North Carolina Shad Boat” in the Museum Small Craft Association’s Transactions vol. 3 (1996-97).

Midyette established his boatyard in Engelhard, roughly a quarter mile above the village bridge across Far Creek. Mrs. Carawan didn’t know exactly when that was, but I am guessing it was around 1892, when her father married her mother, Anna Luvenia Spencer.

Mrs. Carawan did not discuss where or how her father learned to build shad boats. She may not have known. One wonders if he spent some part of his early life on Roanoke Island.

At his boatyard in Engelhard, Capt. Nal and his brothers Charlie, Joe and Riley built shad boats and a variety of other workboats, including skiffs, yawls and at least one schooner.

In addition to the boatyard, he also had a small farm, did at least some commercial fishing and ran a general store.

The store was apparently his downfall.  According to Mrs. Carawan, her father was overly generous in extending credit to local farming and fishing families when they were going through hard times– and there were a lot of hard times in Hyde County in the late 1800s.

Nal Midyette and his family left Engelhard in 1921. They moved to Pantego, a small coastal town in Beaufort County.

According to his daughter, the family relocated to Pantego so that her father could take a job at the Hackney Wagon Company, a large carriage and wagon maker whose main factory was in Wilson, N.C.

In addition to making carriages and wagons, the company evidently built a small number of yachts at a boatyard on Pantego Creek.

According to Earl’s interview with Mrs. Carawan, Capt. Nal built yachts at the Hackney boatyard during the last part of his career. He may have built or re-built other types of boats on the side.  However, we have no record of him building shad boats after he left Engelhard.

The Wreck of the Milton S. Lankford

Nal Midyette died at sea in 1932, when he was 64 years old. The story of his death was tragic and his daughter clearly still felt anguish over his loss when she talked with Earl half a century later.

According to Mrs. Carawan, the accident happened on a voyage from Elizabeth City to Baltimore. Her father was on a small auxiliary (gasoline) schooner named the Milton S. Lankford, a craft built in Maryland but which Midyette had purchased and had just redone the interior.

On that voyage, the Milton S. Lankford’s crew included two of his sons and three other men.

They were carrying a cargo of 3,500 watermelons at the time. According to one account, Capt. Nal had only joined his sons so that he could visit a friend in Baltimore that he had not seen in many years.

Postcard of the steamer State of Maryland, operated by the Baltimore Steam Packet Co. (nicknamed “The Old Bay Line”). From Amazon.com

The Milton S. Lankford was in heavy seas four miles off Smith’s Point, at the mouth of the Potomac River, when the Old Bay Line steamer State of Maryland collided with her. It was one o’clock in the morning.

One of the survivors later said that Capt. Nal was at the wheel at the time.

The collision shattered the Milton S. Lankford’s hull and she capsized and broke in two.  Another vessel’s crew rescued one of Capt. Nal’s sons and three others,  but Capt. Nal and another of his sons perished at sea.

In Earl’s interviews, Nal Midyette stands out as one of the most exceptionally gifted builders of shad boats.

As I mentioned earlier, a number of those old boat builders and fishermen spoke of Midyette’s boats in almost reverential terms.

Earl’s uncle, Joe Meekins, for instance, was born in 1892 and built shad boats in his younger days. On one of the occasions when he and Earl discussed shad boats, he praised George Washington Creef’s boats but clearly put Nal Midyette on the same pedestal that he did Creef.

Meekins even said that one of Nal Midyette’s shad boats, the Nal Midyette, named after the master boat builder, was the fastest shad boat that he ever saw.

Other boat builders and fishermen praised Midyette’s boats no less. Repeatedly they singled him out for building fast, well-made and graceful boats.

One of those fishermen, John Herbert of Hatteras Island, said flat out: “Nal Midyette was the champion shad boat builder.”

Herbert and others recalled that Midyette’s boats proved to be formidable competitors in the shad boat races that fishermen held in the waters around Roanoke Island in the summertime.

Herbert told Earl that he won many a race in his Nal Midyette-built shad boat when he was a young man. He even claimed that other fishermen didn’t welcome his boat or others built by Midyette at those races.

According to Herbert, other fishermen didn’t want to race against a Nal Midyette-built boat!

In the summertime, the local fishermen raced their shad boats with gusto in the waters around Roanoke Island. If the weather was good and the wind blowing hard and steady, they’d sometimes race 2 or 3 times a week.

On those occasions, crowds gathered on the shore, wagers were laid and a great deal of fun had.

One of Earl’s sources, Vernon Gaskill, recalled that a popular racecourse ran from a buoy at Duck Island, south of Roanoke Island, to Stetson’s Channel, next to the Bodie Island Lighthouse.

Another old-timer, John Herbert, the fisherman in Rodanthe, on Hatteras Island, used to race his Nal Midyette-built shad boat on the Pamlico Sound. He recalled that he and the other fishermen especially enjoyed racing in a good blow.

They knew they had special boats, and they wanted to see what they could do. With their boats heavy in sand bag ballasts, they brought out their goose wings and flying jibs and headed out into the sound in search of glory. 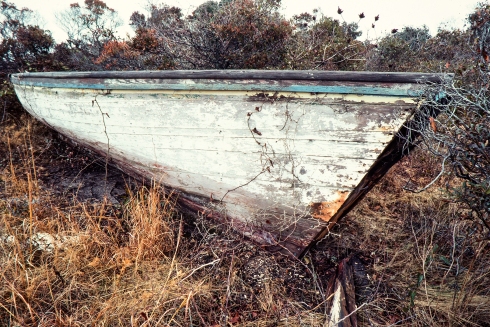 Hatteras Island photographer Mike Halminski found his friend John Herbert’s shad boat in the Rodanthe marshes in 1985. Herbert told him that he won many a race on Pamlico Sound with the boat in his younger days. This is the only confirmed image of a Nal Midyette-built boat that I have been able to find. Photo courtesy of Michael Halminski