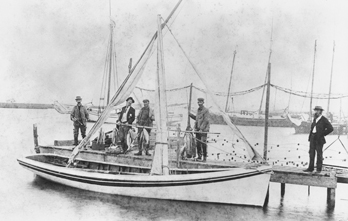 This is the 10th part of my special series “The Story of Shad Boats.” The series features Earl Willis, Jr. and Mike Alford’s extraordinary journey to document the history of North Carolina’s “state boat.”

Another lesson that I learned from Mike and Earl’s research is this: commercial fishermen used their shad boats for a great deal more than harvesting shad.  In the words of Roanoke Island’s old timers, they also did a whole lot of “proggin” after they finished the shad season and took up their nets.

Mike is especially fond of using the term “proggin,’” having been quite a progger himself in his younger days.

In the neighborhood of the Outer Banks and Roanoke Island, old timers used to use the term in a broader sense, too.

They’d ask somebody, “How you proggin?” That meant “How are you getting along?” or “How’s it going?”

The origin of the word “proggin” or “progging” is a bit unclear. However, some scholars suspect that the word derives from “pirogue,” a word borrowed from French that describes a long, narrow boat built out of a single tree trunk.

Two and three centuries ago, that boat was just the kind of craft to go “proggin’” in, as we might do in a skiff today. 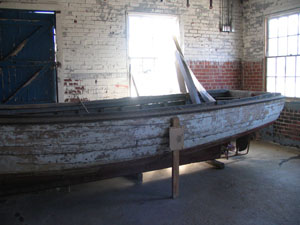 According to one theory, the French borrowed the word pirogue from the language of the Caribs. At the time of Columbus, those indigenous coastal people inhabited the Lesser Antilles and what’s now Suriname, French Guiana and other parts of the northern coast of South America.

In those early, polyglot days of America, the colonial languages– Portuguese, French, Spanish, English, Dutch and Danish–  were mixing kind of helter-skelter with indigenous languages and African languages.

There is also a Spanish word, piragua, that refers to the same kind of boat.

We also have the word periauger (and its many variants), a related type of dug-out vessel that was common on the North Carolina coast from the late 1600s through the colonial era.

I can’t say for sure, but I would not be surprised if the word periauger derives from the same root word as pirogue and piragua, be it of Carib or some other origin.

At any rate, I’m sorry to obsess on etymology– but if you’re interested in periaugers and their origins, I highly recommend Mike’s article, “Reconstructed Naval Architecture of a Southern Colonial Plantation built Vessel,” which he wrote for the Historic Naval Ships Association.

Whatever the word’s origins, when it came to shad boats, “proggin’” had few limits.

Surveying Earl interviews and Mike’s research notes, I found references to local watermen using shad boats for a host of other kinds of fishing, freight hauling and pleasure boating.

As I read their files, I found old timers using shad boats for harvesting oysters in the fall and winter. 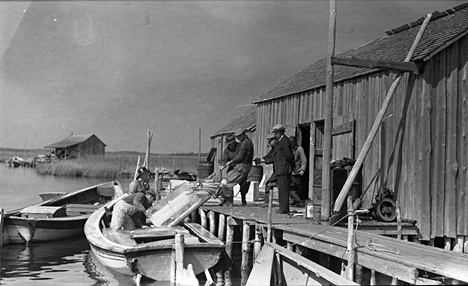 Men heaving a block of ice onto or off of a shad boat at the Globe Fish Company’s outpost at Mill Landing on Roanoke Island, ca. 1935-40. Photo by Charles A. Farrell. Courtesy, State Archives of North Carolina

I found them using shad boats to tend sturgeon nets, and I found them sailing their shad boats into the Atlantic, on the other side of the Outer Banks, and drop-netting for bluefish and sea trout.

Still other records indicate that some coastal villagers used their shad boats for hauling freight, including firewood, livestock and salt fish.

At the end of the shad season, fishermen sometimes loaded a shad boat with ice and took a boatload of fresh fish to Elizabeth City or another coastal town to barter for peas, potatoes and other crops.

During the Prohibition Era, at least one of Earl’s sources used his shad boat to  smuggle liquor. (Hardly a surprise, given East Lake’s reputation.)

Another of Earl’s sources, Elijah Tate, recalled that John Hill built shad boats for the use of the local lighthouse service at his boatyard next to the schoolhouse in Colington, on Bodie Island.

Of course a shad boat that was used to tend pound nets, haul firewood or smuggle liquor one day could be used the next day to carry a family to church or to take a young lady on a picnic. 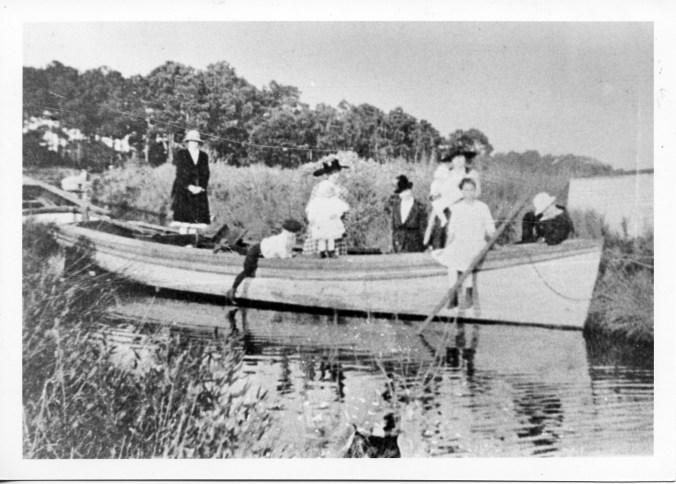 The shad boat Hobo on a Sunday afternoon excursion at Baumtown on Roanoke Island. According to the island’s old timers,  either George Washington Creef or Nal Midyette built the Hobo. A local fisherman named Sam Baum owned her. Courtesy, State Archives of North Carolina

A waterman or woman could obviously do a many kinds of proggin’ in a shad boat– but I should also say that Earl’s interviews point out that many other fishermen really did just use their shad boats during the shad fishing season.

In those cases, when they were done for the season and took up their nets, the fishermen put the word out in the neighborhood that there was going to be a boat hauling at E. R. Daniels’ or one of the other local boatyards.

Soon men from all over the community would come down to the shore and help haul the shad boats out of the water, using logs that had been preserved in mud all winter to roll them.

Those fishermen, Vermon Gaskill told Earl, didn’t even bother to copper their shad boats’ bottoms, since they weren’t worried about the shipworms that plagued them in warm weather.

With the shad season behind them, most of those men either worked off the water or joined a boat crew doing something else the rest of the year.

They lived out of their gardens and fields, ran freight boats, worked in sawmills or logging camps, guided hunting parties or built boats and did general carpentry–  and often they did quite a few of those jobs in any given year. It was a progger’s life of a different sort.

“THE FREEST PEOPLE IN THE WORLD”

Roanoke Islanders were far from being the only proggers on the North Carolina coast. As Ed Pond in Davis Shore recently reminded me, no place had more proggers than the Down East part of Carteret County.

When I talked with Ed the other day, he estimated that 30 percent of the local men in Davis Shore and in nearby villages such as Marshallberg and Gloucester would have called themselves “proggers” when he was a boy—not fishermen and not shrimpers, but “proggers.”

He first heard the term “progger” from his mother, Effie Davis Pond. He remembered that the two of them saw a man headed down to the shore and Ed asked her what the man was going to do when he took out his boat.

She told him, “He’s a progger. He’s going to do whatever the weather and the water let him do.”

When Ed’s mother was young, a Down East progger would probably have been heading out in a 21-ft. sail skiff—you wouldn’t have found a shad boat Down East, or rarely so.

In the bottom of his boat, Ed told me, he’d have clam and oyster rakes, a gig, a gill net and maybe a shotgun, too—in case he saw a rabbit or a raccoon while he was sailing along a marsh.

On any given day, he might catch a few spots and hogfish, dig a few clams and gather a bucket of conchs for his wife’s chowder pot.

If he ran into a big school of mullet or bluefish, he’d leave his other gear alone and spend the day fishing.

That night his whole neighborhood might well be eating his mullet or bluefish.

Good day or bad, a progger could usually at least put food on the table. “They fed themselves,” Ed told me.

Few proggers had much. Few made much money, and they lived in more ways than one on the margins. A Down East progger lived hand to mouth and to a large degree by barter.

But in Ed’s eyes, a progger’s life had upsides, too. To him they were people to be admired.

They didn’t have a boss or anybody looking over their shoulder. Unlike so many shrimpers and commercial fishermen, they weren’t in debt to a fish dealer or the bank.

Generally speaking, they didn’t buy what they couldn’t pay for —no big trawlers, no boat mortgage.

Not much money either, but a deep-down closeness to the waters of Core Sound and a lot of freedom.

“No allegiance to anybody,” Ed said of them. “They were the freest people in the world.”

One thought on “A Proggin’ Life”