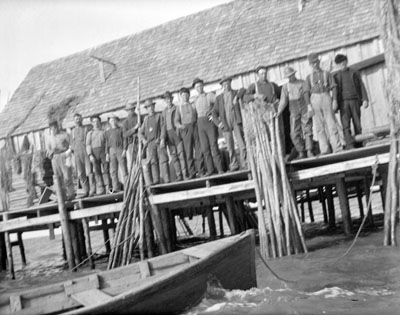 I don’t know as much about the Barney Slough Fish Camp as I’d like, but I love this photograph of the fishermen that stayed there back in the winter of 1905. They were shad fishermen and you can see them lined up for this portrait standing with their pound net stakes.

They would live out there out there on the eastern edge of the Pamlico Sound, in the shallows just off of Hatteras Island, beginning about this time of year (mid-February) and going into the first days of spring.  They would go out and tend their nets every morning at dawn no matter how hard and how cold the nor’easters blew, and they did blow hard and cold that time of year.

The shad fishery was the state’s largest saltwater fishery at that time. All the way from Hatteras Island to Currituck Sound, you’d find camps like this one, though most weren’t so grand. On that eastern side of the sounds you’d find them especially thick around Roanoke Island. You would also have found plenty of them on the shores of Stumpy Point, Manns Harbor and other points on the western side of the Pamlico Sound.

I don’t know, but I assume that this gang of fishermen didn’t come from Hatteras or they would have slept nights at home. They might have come from anywhere– Core Sound, Roanoke Island, Engelhard, no telling.

A naturalist named H. H. Brimley (1861-1946) took this photograph and the other photographs here. An English immigrant, he started out as a wildlife taxidermist in Raleigh and ended up as the founding curator and long-time director of what’s now called the North Carolina Museum of Natural Sciences in Raleigh.  He often traveled to remote parts of the coast on collecting trips for the museum.

I don’t know why he stopped at Barney Slough. There were no bridges to Hatteras Island in those days and I’m guessing he had caught a ride on one of the boats that made regular runs to the island and it stopped at the fish camp on the way or on the way back.

Brimley might have taken the mailboat or a freight boat, but he may also have  traveled on the Globe Fish Company’s steamer that made daily runs to the shad fishing camps on that end of the sound. The steamer’s crew picked up the Barney Slough crew’s catch, put the fish on ice and carried them back to Elizabeth City, where the company was based and where there was a rail line so that they could send shipments of shad far and wide.

I just took a closer look at Brimley’s photograph (below) of the shad on the fish camp’s dock and I noticed the prow of a sailing vessel in the background. It’s probably a sloop or a small schooner. It’s too big for the mailboat and it’s a sailing vessel, not a steamer, so I think it’s likely Brimley arrived on a freight boat.

In that case, he probably sailed out of Washington, N.C., a port 80 miles west on the Pamlico River. Merchants there were the biggest suppliers of goods to that part of the Outer Banks in that day, and if you were traveling from Raleigh most people would have come that way.

In his notes Brimley referred to the camp’s location as “Barn Slue,” but it was more commonly called “Barney Slough,” which it still is today. If you’ve taken the state ferry from Ocracoke to Hatteras lately, you’ve gone over a section of the slough. It’s not far from the village of Hatteras.

According to Danny Couch, a local historian in Hatteras, the name “Barney Slough” refers to Barney Flowers Peele, a fisherman and mariner who was born on the island in 1837.

Danny recently told me that Peele’s family fished the slough for many years. At least for a time after the Civil War, Barney also ran a coasting sloop in and out of Hatteras, passing through the slough on freight trips to and from coastal towns on the far side of Pamlico and Albemarle sounds.

The fishermen at the Barney Slough camp covered a lot of territory. This was the very end of the Age of Sail in the shad fishery. In a few years, the fishermen’s boats  would all have had gasoline motors, but in 1905 they still carried sails. Working in two-man crews, the fishermen rose before first light and set sail for the parts of Pamlico Sound where they had staked their pound nets.

From Barney Slough they likely scattered south, west and north, and some probably sailed to sites five and ten miles away. That was one important reason that their sailboats, which were a very particular design of vessel that appropriately came to be known as “shad boats,” were so pretty and such fine sailors: their builders, most of them on or near Roanoke Island, knew they needed to be fast sailors so they could cover a lot of water and get their catches and their crews back to their camps both quickly and safe and sound.

The photograph at the top shows 14 men and boys, so they made up a seven crews. Each crew probably tended three or four pound nets a day and maybe more, depending how far and how far apart they were. That was a lot of pound nets, and in good times a lot of shad.

They’d carry their catches back to the camp and eat a late breakfast, which was usually fish and either sweet potatoes or “Irish” potatoes, biscuits or cornbread.

Brimley’s photographs are preserved now in the H. H. Brimley Collection at the State Archives of North Carolina in Raleigh. The thing I like about them most is the way that Brimley gave us a snapshot of domestic life inside the fishermen’s camp: the cluttered mess table, looking as if the men had just dashed out to their boats, their leftover biscuits and the bones of half-eaten fish still on the table, and their bunks with their disheveled, homemade quilts and a solitary seaman’s chest.

It’s just a few photographs, but in them we get a little glimpse at what life was like on the edge of the sea in that day and time.