Here on Martin Luther King, Jr. Day, I thought I’d share a historical document from one of the most famous civil rights events in American history,  the campaign to end racial segregation in Birmingham, Alabama– and also talk a little about Dr. King’s visits to North Carolina.

We are all familiar with the scenes of police chief Bull Connor using attack dogs and fire hoses against child protestors in Birmingham.

Before Dr. King allowed young people to participate in the direction action, non-violent protests in Birmingham, however, he required them to sign this pledge—he and local civil rights leaders called it a “commitment card.”

I hereby pledge myself — my person and body — to the nonviolent movement. Therefore I will keep the following 10 commandments:

1. Meditate daily on the teachings and life of Jesus.

2. Remember always that the nonviolent movement seeks justice and reconciliation, not victory.

3. Walk and talk in the manner of love, for God is love.

4. Pray daily to be used by God in order that all men and women might be free.

5. Sacrifice personal wishes in order that all men and women might be free.

6. Observe with both friend and foe the ordinary rules of courtesy.

7. Seek to perform regular service for others and for the world.

8. Refrain from the violence of fist, tongue, or heart.

9. Strive to be in good spiritual and bodily health.

What strikes me, and inspires me, in these words is Dr. King’s insistence on reflection and prayer, simple decency, charity and a strong moral code as the foundation of his revolutionary call for justice and freedom

Special thanks to Anita Earls, Associate Justice on the Supreme Court of North Carolina, for introducing this document to me and the rest of her audience at an MLK, Jr. event at First Presbyterian Church in Durham, N.C. last week.

That commitment card came from Birmingham, Alabama, but Dr. King was deeply involved with the civil rights movement here in North Carolina as well.

Dr. King often visited local civil rights movements here in North Carolina. On the coast, he spoke in Edenton, Hertford and Elizabeth City in 1962 (and spoke in Edenton at least one more time in 1966).

Three years later, he spoke in Rocky Mount, where (thanks to NCSU professor Jason Miller) we know that he delivered the earliest version of his “I Have A Dream Speech” that he later gave at the March on Washington.

He spoke at Hillside High School in Durham as early as 1956. He visited the Bull City several other times to support civil rights and labor activists as well.

He gave an especially legendary lecture at Bennett College in Greensboro in 1958. When the city’s fathers prohibited Dr. King from speaking anywhere else in the city, Bennett’s president, Dr. Willa Beatrice Player, courageously extended an invitation to him.

Dr. Player, by the way, was the first African American women to serve as president of a 4-year college or university in the U.S.

Dr. King also visited North Carolina to speak at an NAACP convention in Charlotte, and he twice came to Black Mountain, on the edge of the Blue Ridge Mountains.

He visited Black Mountain the first time early in 1964 on a work retreat for the leadership of the Southern Christian Leadership Conference (SCLC), the civil rights group that he co-founded and for which he served as president from 1957 to his death in 1968. He later spoke at a Presbyterian conference there.

During those years, SCLC field organizers also worked closely with local civil rights movements here in North Carolina that Dr. King never had the opportunity to visit himself, though he followed and advised his staff’s work in those places.

That included historic civil rights movements in Bertie, Craven, Jones, Martin, Pitt, Washington and Wilson counties, at least, and probably others that I am forgetting. 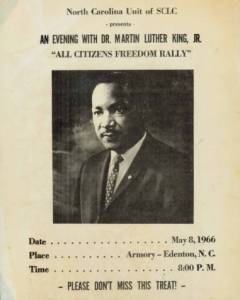 Dr. King’s “commitment card” from Birmingham, Ala., was probably only used in Birmingham. However, its spirit– that message of deep faith, spiritual reflection, service to others, nonviolence of heart and mind and a fierce willingness to struggle and sacrifice for peace and justice—was no less alive in dozens of cities and small towns across North Carolina.

To learn more about Dr. King’s speeches and visits to North Carolina, be sure to check out Professor Jason Miller’s “King’s First Dream” web site. You can also find an essay here that I wrote last year about a remarkable commemoration in Rocky Mount of Dr. King’s speech there in 1962.

One thought on “Martin Luther King, Jr. from Edenton to the Blue Ridge”